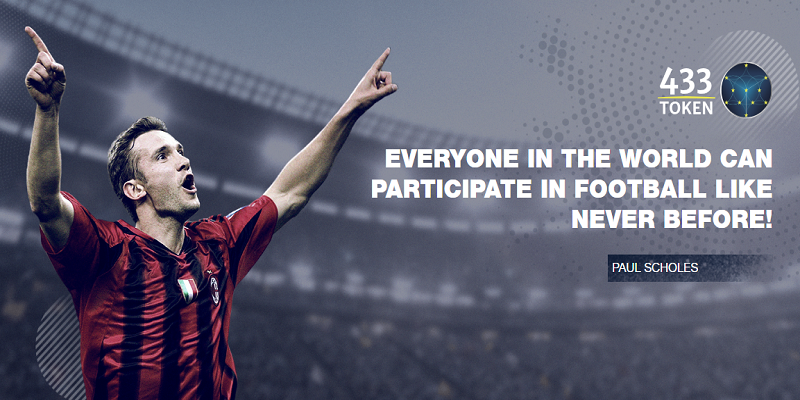 Blockchain technology has the power to decentralize constructs and provide transparency to all types of industries. The 433 token ecosystem — from the company Soccer Legends Limited — is designed to bring together fans, soccer legends, and youth players on an incentive-driven platform.

Soccer is the most popular sport in the world with some of the highest paid stars and most lucrative TV contracts. The 2018 FIFA World Cup drew more than 3.3 billion viewers, and there are an estimated 265 million soccer players worldwide.

The 433 ecosystem is built on blockchain technology to decentralize the process for fans to interact with legendary players and those legends to mentor youth football players. Partnered with the Global Legends Series (GLS) of retired soccer legends, 433 looks to give fans an unparalleled chance to interact with their favorite players.

The 433 token ecosystem is built to focus on three primary utilities:

Fans can stake tokens to sponsor legends who subsequently mentor youth players, and can vote on venues for major GLS games and events. Moreover, fans can participate in charity events with their favorite soccer legends through the smart contract governed bidding system for events with the legends.

The sponsoring process consists of fans staking their 433 tokens to support their favorite players, who in turn mentor up to 5 youth academy soccer players. As an incentive, the mentors receive the stake sponsorship tokens after meeting specific threshold requirements for their mentorship. Because the 433 is open to all ages, there will be no betting or gambling utilities in the ecosystem.

Fans have historically had limited access to soccer stars or even opportunities to interact with them. Token holders in the 433 ecosystem can participate in a bidding process for a variety of charity events that their favorite players are taking part in. Each event will exist as its own smart contract, and the highest bidder will be awarded the honor of attending the event alongside their favorite player. Star players will donate part of the received tokens for the charity events to local and regional charities as part of the broader GLS initiative.

The GLS is an established retired soccer legends league that plays games and puts on events in major cities across the world. As part of the 433 experience, token holders can participate in the host city selection process through the venue voting smart contract system. The venue voting will be the Minimum Viable Product (MVP) of the 433 token ecosystem and will be launched in Q2 2019.

The team behind 433 is company Soccer Legends Limited. The company is led by CEO Jason Sze and CTO Dr. Wailok Tam with notable advisors including James Davies Yandle (Founder of Sports Events International) and Eric Byron.

The GLS already has a number of high-profile soccer legends including Paul Scholes and Andriy Shevchenko. Instead of solely being advisors, players are active participants in the 433 ecosystem and can mentor up to 5 youth players at a time. 433 expects at least 8 more legends to join the community upon reaching the token sale hard cap.

The 433 token sale will go live in October 2018 and finish at the end of November 2018. You can find more of the details on the token allocation on their website and whitepaper.

The ICO will offer 300 million out of the total 1 billion 433 tokens to the public. There is no emission rate, and the 433 token is an ERC-20 token built on the Ethereum blockchain.

With over 3 billion soccer fans worldwide, 433 is poised to introduce a new wave of users to cryptocurrencies and blockchain technology. 433 will help promote understanding and acceptance of the technology as well as provide liquidity to token holders.

Soccer superstars finally have the incentive-driven solution they need to interact with their fans transparently and reliably. Retired legends get the opportunity to play in major global events again, and youth players have the chance to experience the mentorship of a lifetime.

The 433 token ecosystem is building a platform for fans to participate in soccer like never before.