New York, 15 May, 2018 – Trive, a social science global consensus engine that researches and clarifies facts and empowers users through cryptocurrency to discover truth through wisdom of the crowd, has announced the launch of its highly-anticipated test bed and upcoming attendance at New York Blockchain Week. For the Trive team, this marks another milestone in their mission to take down fake news and devalue the sources that spread it.

The test bed, titled Trive Verify, is the beginning of the build out of the Trive ecosystem. Its core function within the Trive development plan: research into a single factoid and user community engagement. Consumers and publishers can use Trive Verify to fact check information found on the internet while all users contribute to Trive’s decentralized fact finding engine development.

Captured images, URLs and consumer directives are uploaded via the Trive browser plugin or web tool to the Trive Verify Engine where researchers and verifiers proceed to add support to, or negation of the purported fact from the submission through their work. By choosing how many researchers and verifiers will review a factoid, consumers can select added degrees of precision and quality to the research scope.

Once the work is complete, the Trive Engine notifies via email, as well as posting the score of the research directly to webpages that have been ‘trived’ and later visited by anyone with the installed plugin.

Trive further allows direct access to actual research materials offering anyone an opportunity to see behind the curtain and gain an earned trust of the Trive Engine process. Trive will create a Nash Equilibrium, game theory based, incentive structure for research into news stories and other claims of fact. Adversarial tokenized collusion proof interaction between user types is what will drive the Trive Engine at full development.  Trive Verify is that first step. 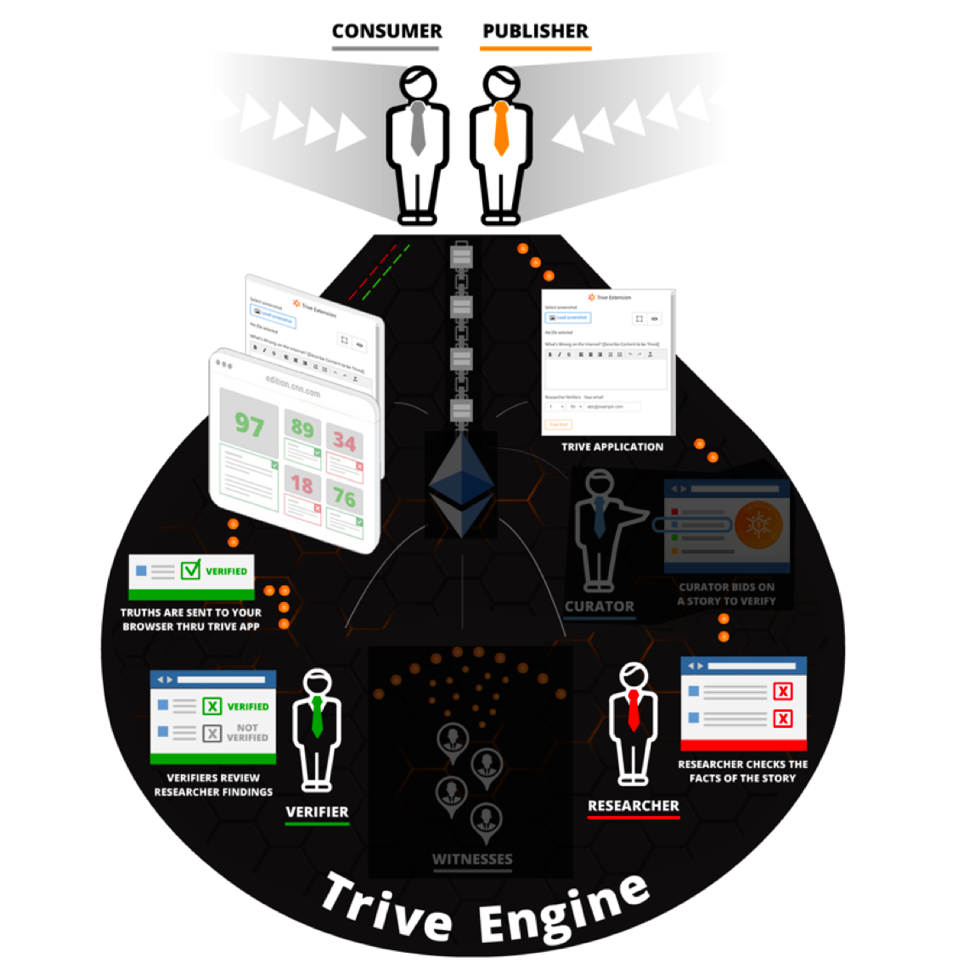 Trive CEO, David Mondrus, explains, “Trive Verify represents the first steps into the Trive ecosystem and a future of reliable, transparent, fact checking and accountability across the web. Trive will ultimately verify any piece of data on the internet using a simple interface and a crowd driven engine. Trive Verify allows YOU to get involved right now.

It provides us an opportunity to understand what features will best serve the Trive community. Consumer and User engagement in Trive Verify will help grow Trive to the promise of a user driven, fully decentralized application with foundational business structure to support it autonomously into the future.”

Mondrus’ experience with fake news digs deep into his past. Born in the propaganda-fueled climate of the Union of Soviet Socialist Republics (USSR), Mondrus understands first-hand the very real dangers of fake news. “The expression was that you learned to read between the lines, before you learned to read,” Mondrus explains.

“We all inherently know, and do not have to be taught, that no good decision can be made on flawed information and lies. Trive is an expression of David’s passion to take responsibility for the world he lives in. His passion is infectious and the product of his mind, simply inspiring.” adds Matt White, COO of Trive.

Meet the Trive Team at These Events:

To kick-off the launch of Verify, Trive CEO David Mondrus will be attending New York Blockchain Week, a week-long blockchain initiative with over 80 events. The leading event, Consensus, will draw in an estimated 10,000 attendees, up from just 2,700 in 2017. Bringing together industry leaders and blockchain enthusiasts, Consensus is one of the premier blockchain events in the United States.

Combining wisdom of the crowd and game theory, Trive is poised to enable people around the world to research, verify and score the truth of almost any piece of information while securing that proof to the blockchain as an infinite index in an unalterable state. Trive seeks to end historical negationism and build a fertile seedbed of unadulterated facts for future generations to build upon their own knowledge and understanding.

This article was originally published on CoinAnnouncer on May 16, 2018 by Amy Tori.

Crypto vs. Fiat – Which one Is Better?

Particularities of Risk Sentiment in the Crypto Market